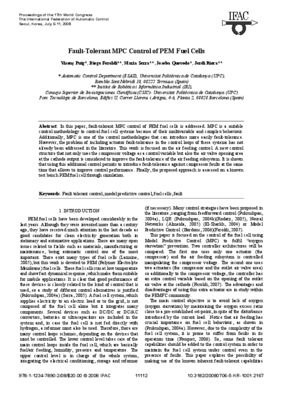 Trabajo presentado al 17th IFAC 2008 celebrado en Seul.In this paper, fault-tolerant MPC control of PEM fuel cells is addressed. MPC is a suitable control methodology to control fuel cell systems because of their multivariable and complex behaviour. Additionally, MPC is one of the control methodologies that can introduce more easily fault-tolerance. However, the problem of including actuator fault-tolerance in the control loops of these systems has not already been addressed in the literature. This work is focused on the air feeding control. A new control structure that not only uses the compressor voltage as a control variable but also the air valve opening area at the cathode output is considered to improve the fault-tolerance of the air feeding subsystem. It is shown that using this additional control permits to introduce fault-tolerance against compressor faults at the same time that allows to improve control performance. Finally, the proposed approach is assessed on a known test bench PEM fuel cell through simulation.This work was supported by the project 'Avances en el modelo y diseño de controladores para sistemas basados en pila de combustible PEM' (4800). The authors wish to thank the support received by the Research Commission of the Generalitat of Catalunya (Grup SAC ref. 2005SGR00537), by CICYT (ref. DPI-2005-05415) and CICYT (ref. DPI-2004-06871-C02-01) of the Spanish Ministry of Education.Peer Reviewe