OBJECTIVE: The intent of this study was to examine the recovery of individuals who had been hospitalized for severe acute respiratory syndrome (SARS) in the year following their discharge from the hospital. Parameters studied included serum levels of SARS coronavirus (SARS-CoV) IgG antibody, tests of lung function, and imaging data to evaluate changes in lung fibrosis. In addition, we explored the incidence of femoral head necrosis in some of the individuals recovering from SARS. METHODS: The subjects of this study were 383 clinically diagnosed SARS patients in Beijing, China. They were tested regularly for serum levels of SARS-CoV IgG antibody and lung function and were given chest X-rays and/or high resolution computerized tomography (HRCT) examinations at the Chinese PLA General Hospital during the 12 months that followed their release from the hospital. Those individuals who were found to have lung diffusion abnormities (transfer coefficient for carbon monoxide [D(L)CO] < 80% of predicted value [pred]) received regular lung function tests and HRCT examinations in the follow-up phase in order to document the changes in their lung condition. Some patients who complained of joint pain were given magnetic resonance imaging (MRI) examinations of their femoral heads. FINDINGS: Of all the subjects, 81.2% (311 of 383 patients) tested positive for serum SARS-CoV IgG. Of those testing positive, 27.3% (85 of 311 patients) were suffering from lung diffusion abnormities (D(L)CO < 80% pred) and 21.5% (67 of 311 patients) exhibited lung fibrotic changes. In the 12 month duration of this study, all of the 40 patients with lung diffusion abnormities who were examined exhibited some improvement of lung function and fibrosis detected by radiography. Of the individuals receiving MRI examinations, 23.1% (18 of 78 patients) showed signs of femoral head necrosis. INTERPRETATION: The lack of sero-positive SARS-CoV in some individuals suggests that there may have been some misdiagnosed cases among the subjects included in this study. Of those testing positive, the serum levels of SARS-CoV IgG antibody decreased significantly during the 12 months after hospital discharge. Additionally, we found that the individuals who had lung fibrosis showed some spontaneous recovery. Finally, some of the subjects developed femoral head necrosis 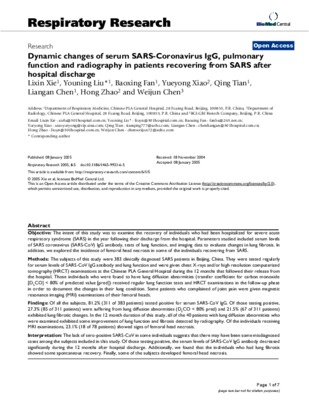