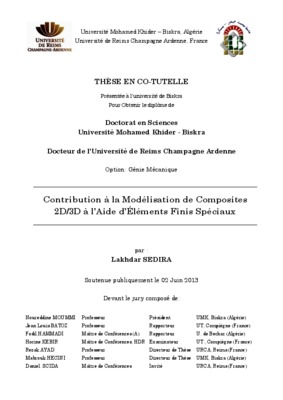 By Lakhdar SEDIRA
Get PDF (5 MB)

This doctoral thesis deals with the finite element formulation and evaluation of a modified Mindlin's discrete variational model for static, dynamic, linear and non-linear composite plates and shells analysis. Including additional terms of zigzag type, in order to improve the accuracy of stress, the model has been reformulated to take into account the linear picewise of displacement variation. Consequently, two finite plate and shell elements with four nodes, called DMQP and DMQS (Discrete Quadrilateral Mindlin Plates and Shells respectively), enhanced by quadratic field rotations, have been developed and validated under REFLEX and ABAQUS codes. Both elements including the zigzag effect have been also developed in a second version, and validated through several static and dynamic test problems known from the literature, highlighting the independence towards the transverse shear correction and in particular the stress accuracy with respect to the initial model without the zigzag effect. The satisfactory results of this model found through cases of linear isotropic shell tests, motivated us to extend this approach to the non-linear geometric applications. An isoparametric curve element of shell has been developed for this purpose, where small elastic deformation assumptions of and large displacements and moderate rotations are adopted. It is geometrically simple and has only four nodes at corners and 6 DOF/node. The elementary calculation of the tangent stiffness matrix consists in combining the linear part of the curved shell element (DMQS) with that of the membrane Q4 non-linear part. An Updated Lagrangian Formulation at each Iteration (ULFI) is used with Newton-Raphson resolution Method. Some standard tests of nonlinear geometrical shell structures are presented; they show a very good convergence and global behavior better than such elements