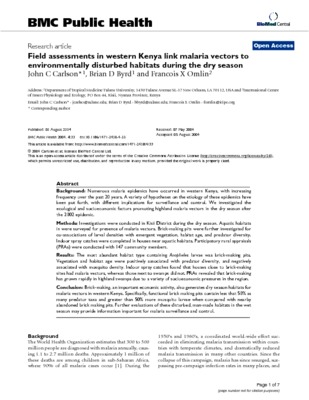 BACKGROUND: Numerous malaria epidemics have occurred in western Kenya, with increasing frequency over the past 20 years. A variety of hypotheses on the etiology of these epidemics have been put forth, with different implications for surveillance and control. We investigated the ecological and socioeconomic factors promoting highland malaria vectors in the dry season after the 2002 epidemic. METHODS: Investigations were conducted in Kisii District during the dry season. Aquatic habitats in were surveyed for presence of malaria vectors. Brick-making pits were further investigated for co-associations of larval densities with emergent vegetation, habitat age, and predator diversity. Indoor spray catches were completed in houses near aquatic habitats. Participatory rural appraisals (PRAs) were conducted with 147 community members. RESULTS: The most abundant habitat type containing Anopheles larvae was brick-making pits. Vegetation and habitat age were positively associated with predator diversity, and negatively associated with mosquito density. Indoor spray catches found that houses close to brick-making sites had malaria vectors, whereas those next to swamps did not. PRAs revealed that brick-making has grown rapidly in highland swamps due to a variety of socioeconomic pressures in the region. CONCLUSION: Brick-making, an important economic activity, also generates dry season habitats for malaria vectors in western Kenya. Specifically, functional brick making pits contain less that 50% as many predator taxa and greater than 50% more mosquito larvae when compared with nearby abandoned brick making pits. Further evaluations of these disturbed, man-made habitats in the wet season may provide information important for malaria surveillance and control