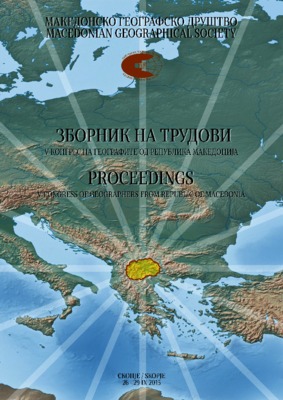 Speleothems in the cave Slatinski Izvor

According to the environments in which speleothems are formed in the cave Slatinski Izvor, they belong to three groups: speleothems formed by flowing and dripping water, speleothems formed by capillary water and pool deposits. Three samples of speleothems were analyzed. In all samples the mineral calcite was detected. The chemical composition showed that CaO and SiO2 were the dominantly represented, whereas Sr and B were the dominant trace elements in all rocky samples. Hydrochemical properties of water samples of three drips from the same cave were analyzed in the period December 2011 - October 2013, in the dry period of the year. Four methods (Piper diagram, Stiff diagram, Chadha diagram, and D’Amore diagram) were applied in order to determine the hydrochemical properties of the water samples. The results showed that all water samples had the same origin, dolomite rocks had the dominant impact of the drip water, HCO3 and SO4 were dominant dissolved species in the water, and there was no contaminants in the aquife