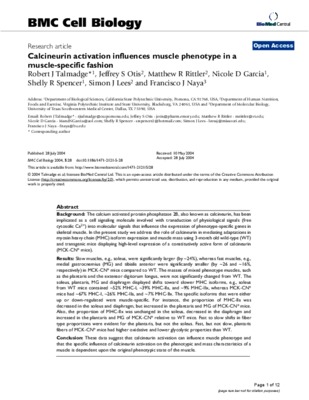 BACKGROUND: The calcium activated protein phosphatase 2B, also known as calcineurin, has been implicated as a cell signaling molecule involved with transduction of physiological signals (free cytosolic Ca(2+)) into molecular signals that influence the expression of phenotype-specific genes in skeletal muscle. In the present study we address the role of calcineurin in mediating adaptations in myosin heavy chain (MHC) isoform expression and muscle mass using 3-month old wild-type (WT) and transgenic mice displaying high-level expression of a constitutively active form of calcineurin (MCK-CN* mice). RESULTS: Slow muscles, e.g., soleus, were significantly larger (by ~24%), whereas fast muscles, e.g., medial gastrocnemius (MG) and tibialis anterior were significantly smaller (by ~26 and ~16%, respectively) in MCK-CN* mice compared to WT. The masses of mixed phenotype muscles, such as the plantaris and the extensor digitorum longus, were not significantly changed from WT. The soleus, plantaris, MG and diaphragm displayed shifts toward slower MHC isoforms, e.g., soleus from WT mice contained ~52% MHC-I, ~39% MHC-IIa, and ~9% MHC-IIx, whereas MCK-CN* mice had ~67% MHC-I, ~26% MHC-IIa, and ~7% MHC-IIx. The specific isoforms that were either up or down-regulated were muscle-specific. For instance, the proportion of MHC-IIa was decreased in the soleus and diaphragm, but increased in the plantaris and MG of MCK-CN* mice. Also, the proportion of MHC-IIx was unchanged in the soleus, decreased in the diaphragm and increased in the plantaris and MG of MCK-CN* relative to WT mice. Fast to slow shifts in fiber type proportions were evident for the plantaris, but not the soleus. Fast, but not slow, plantaris fibers of MCK-CN* mice had higher oxidative and lower glycolytic properties than WT. CONCLUSION: These data suggest that calcineurin activation can influence muscle phenotype and that the specific influence of calcineurin activation on the phenotypic and mass characteristics of a muscle is dependent upon the original phenotypic state of the muscle