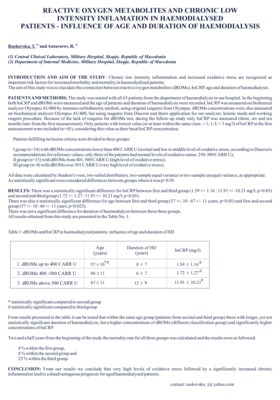 Chronic low intensity inflammation and increased oxidative stress are recognized as important risk factors for morbidity and mortality in haemodyalised patients. The aim of this study was to elucidate the connection between reactive oxygen metabolites (dROMs), hsCRP, age and duration of haemodialysis. In the beginning of study both hsCRP (original immuno-turbidimetric method for Olympus AU400) and dROMs (Diacron, application for Olympus AU400) were measured. During the follow-up only hsCRP was measured (three, six and ten months later). Only patients with lowest value (or at least within the same class: 3 mg/l) of hsCRP at first measurement were included. Patients fulfilling inclusion criteria were divided in three groups: I group (n=24) with dROMs lower than 400 (normal and low to middle level of oxidative stress; only three of them had normal levels of oxidative status: 250-300); II group (n=13) with dROMs 401-500 (high level of oxidative stress); III group (n=8) with dROMs over 501 CARR U (very high level of oxidative stress). There was a statistically significant difference for hsCRP between first and third group (1.59 +/- 1.16 : 11.91 +/- 10.21 mg/l; p<0.05) and second and third group (1.72 +/- 1.27 : 11.91 +/- 10.21 mg/l; p<0.05). There was also a statistically significant difference for age between first and third group (57 +/- 10 : 67 +/- 11 years; p<0.05) and first and second group (57 +/- 10 : 66 +/- 11 years; p<0.025). There was not a significant difference for duration of haemodialysis between these three groups. From these results we conclude that very high levels of oxidative stress are followed by a significantly increased chronic inflammation that leads to a disadvantageous prognosis for haemodialysed patients. dROMs is significantly higher in aged haemodialysis subjects and is not correlated with duration of haemodialysis