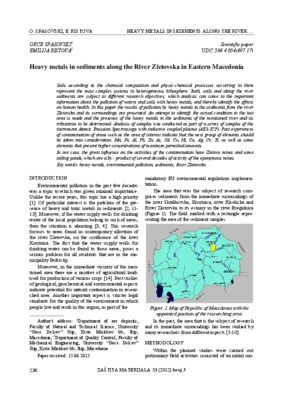 Heavy metals in sediments along the River Zletovska in Eastern Macedonia

Soils according to the chemical composition and physic-chemical processes occurring in them represent the most complex systems in heterogeneous lithosphere. Both, soils and along the river sediments are subject to different research objectives, which analysis can come to the important information about the pollution of waters and soils with heavy metals, and thereby identify the effects on human health. In this paper the results of pollution by heavy metals in the sediments from the river Zletovska and its surroundings are presented. An attempt to identify the actual condition in the test area is made and the presence of the heavy metals in the sediments of the mentioned river and its tributaries to be determined. Analysis of samples was conducted as part of a series of samples of the instrument Atomic Emission Spectroscopy with inductive coupled plasma (AES-ICP). Past experiences of contamination of areas such as the area of interest indicate that the next group of elements should be taken into consideration: Mn, Fe, Al, Pb, Zn, As, Cd, Cu, Ni, Co, Ag, Cr, Ti, as well as some elements that present higher concentrations of maximum permitted amounts. In our case, the great influence on the activities of the contamination have Zletovo mines antailing ponds, which are a by - product of several decades of activity of the eponymous mines