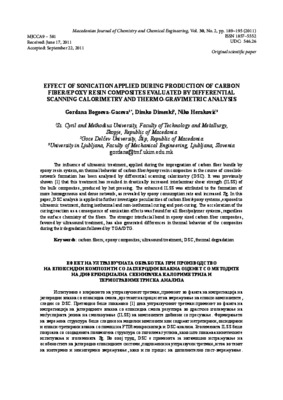 The influence of ultrasonic treatment, applied during the impregnation of carbon fiber bundle by epoxy resin system, on thermal behavior of carbon fiber/epoxy resin composites in the course of crosslinknetwork formation has been analyzed by differential scanning calorimetry (DSC). It was previously shown [1] that this treatment has resulted in drastically increased interlaminar shear strength (ILSS) of the bulk composites, produced by hot pressing. The enhanced ILSS was attributed to the formation of more homogeneous and dense network, as revealed by epoxy consumption rate and increased Tg. In this paper, DSC analysis is applied to further investigate peculiarities of carbon fiber/epoxy systems, exposed to ultrasonic treatment, during isothermal and non-isothermal curing and post-curing. The acceleration of the curing reaction as a consequence of sonication effects was found for all fiber/polymer systems, regardless the surface chemistry of the fibers. The stronger interfacial bond in epoxy sized carbon fiber composites, favored by ultrasound treatment, has also generated differences in thermal behavior of the composites during their degradation followed by TGA/DTG. Key words: carbon fibers; epoxy composites; ultrasound treatment; DSC, thermal degradatio