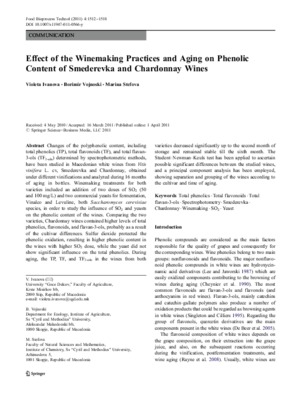 Changes of the polyphenolic content, including total phenolics (TP), total flavonoids (TF), and total flavan- 3-ols (TF3-ols) determined by spectrophotometric methods, have been studied in Macedonian white wines from Vitis vinifera L. cv, Smederevka and Chardonnay, obtained under different vinifications and analyzed during 16 months of aging in bottles. Winemaking treatments for both varieties included an addition of two doses of SO2 (50 and 100 mg/L) and two commercial yeasts for fermentation, Vinalco and Levuline, both Saccharomyces cerevisiae species, in order to study the influence of SO2 and yeasts on the phenolic content of the wines. Comparing the two varieties, Chardonnay wines contained higher levels of total phenolics, flavonoids, and flavan-3-ols, probably as a result of the cultivar differences. Sulfur dioxide protected the phenolic oxidation, resulting in higher phenolic content in the wines with higher SO2 dose, while the yeast did not show significant influence on the total phenolics. During aging, the TP, TF, and TF3-ols in the wines from both varieties decreased significantly up to the second month of storage and remained stable till the sixth month. The Student–Newman–Keuls test has been applied to ascertain possible significant differences between the studied wines, and a principal component analysis has been employed, showing separation and grouping of the wines according to the cultivar and time of aging