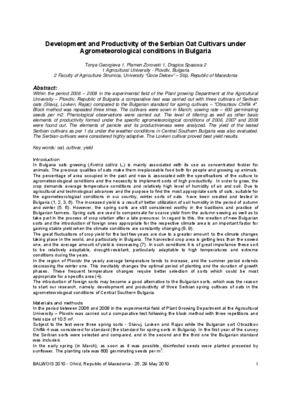 Within the period 2006 – 2008 in the experimental field of the Plant growing Department at the Agricultural University – Plovdiv, Republic of Bulgaria a comparative test was carried out with three cultivars of Serbian oats (Slavuj, Lovken, Rajac) compared to the Bulgarian standard for springcultivars – "Obraztsov Chiflik 4". Block method was repeated three times. The cultivars were sown in March; sowing rate – 600 germinating seeds per m2. Phenological observations were carried out. The level of tillering as well as other basic elements of productivity formed under the specific agrometeorological conditions of 2006, 2007 and 2008 were found out. The elements of panicle and its productiveness were analyzed. The yield of the tested Serbian cultivars as per 1 da under the weather conditions in Central Southern Bulgaria was also evaluated. The Serbian cultivars were considered highly adaptive. The Lovken cultivar proved best yield results