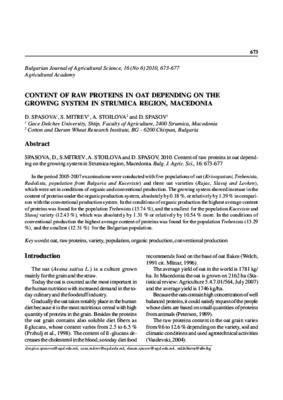 Content of Raw Proteins in Oat Depending on the Growing System in Strumica Region, Macedonia

In the 2005-2007 period examinations were conducted with five populations of oat (Krivogastani, Trebenista, radolista, population from Bulgaria and Kuceviste) and three oat varieties (Rajac, Slavuj and Lovken), which were grown under conditions of organic and conventional production system, absolutely by 0.18% or relatively by 1.39% in comparison with the conventional production system. The populations Trerbenista, Radolista, Krivogastani and the population from Bulgaria had higher content of raw proteins (average for the three years) in the conditions of organic production