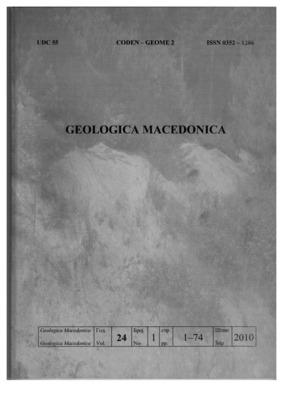 Tectonic Evolution of the Paleogene Basins in the Republic of Macedonia

Paleogene sediments on the territory of the Republic of Macedonia are widespread, especially in its central and eastern parts, i.e. in the Vardar zone and Serbo-Macedonian massif (Kraisthide zone). After Laramide orogeny compression, in expansion conditions, along the gravitational faults, continental trenches were created on these spaces, with general direction NW-SE, in which paleogene molassa sediments were accumulated. In the Vardar zone, continental trenches are extended to the north to Skopska Crna Gora mountain (north of Skopje), which includes the Skopje-Kumanovo basin, Ovče Pole basin, Tikveš basin, Gevgelija - Strumica basin and Valandovo basin. In Kraisthide zone continental trenches stretches along the border with Bulgaria and it includes Deve Bair basin and Delčevo basin. Bearing in mind the different thickness of the allocated Paleogene lithozones in the separate basins, and the fact that in some basins lithozones absent, it can be assumed that their spreading along trenches were segmented by cross faults with NE-SW direction. Cross faults are mainly contemporaneous faults