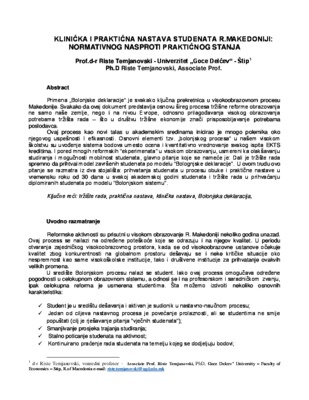 By Riste Temjanovski
Get PDF (276 KB)

Implementation of "Bologna" is certainly an important milestone in the process of higher education in R.Macedonia. Certainly this document is based on a broader process of market reforms of education system, not only in our national but also at European level, and adjusting to the higher education needs of the labor market - which in a market economy society, means the employer needs. This process as a new wave in academic environments initiated a lot of controversy about its effectiveness and efficiency. The main elements of the so-called. "Bologna process" in our higher education system is the introduction of points rather than from the quantitative evaluation of each exam ECTS credits. Despite the many reform "experiments" in higher education, aimed at facilitating the study and the possibility of student mobility, the main question that arises in this discussion is: Does the labor market is ready to absorbed model of graduates based on the "Bologna Declaration". In this effort, this issue is considered from two questions: accepting students in the process of training and practice in the time period of 30 days in each academic year and students and the labor market in the acceptance of graduates according to "Bologna system". Key words: the labor market, practical teaching, clinical teaching, Bologna Declaratio