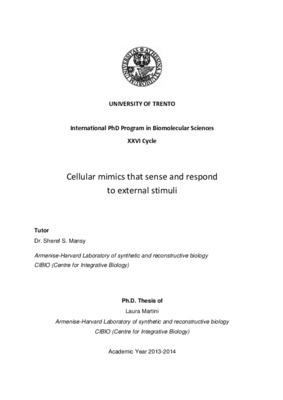 Cellular mimics that sense and respond to external stimuli

To date little effort has been expended on the construction of cellular mimics from a minimum number of component parts. Such systems are desirable, because the cellular mimics could serve as useful tools to more deeply delve into the systems level reactions that sustain life and as a platform from which new types of technologies could be generated. Herein the building of cellular mimics that can sense and respond to external stimuli is presented. The majority of our efforts in building cellular mimics are directed towards the sensory element. Initially, previously characterized natural and artificial RNA sensors, i.e. a riboswitches, are exploited. Subsequently, the cellular mimics are implemented as chemical translators for natural bacterial cells. To expand the capabilities of the engineered cellular mimics, we sought to develop a methodology for the selection of new RNA-based sensors capable of detecting new analytes. The tested methodologies were based on mRNA display and strand displacement reactions. The mRNA display selection did not lead to the identification of a sensor responsive to malachite green after eight cycles of selection. Conversely, via ligand induced triggering of a strand displacement reaction, new RNA sensors for thiamine pyrophosphate were selected from a small library. The sensors displayed translational control ability as is typical of certain classes of riboswitches. The strand displacement-based selection method represents a first step towards the in vitro evolution of sensing elements than can be exploited for new cellular mimics with programmable sensing capability