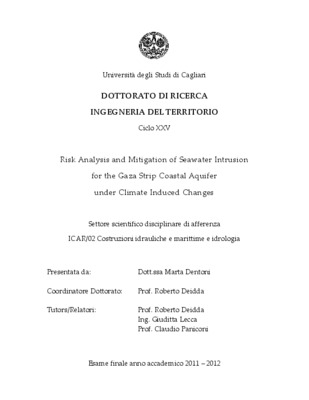 By Marta Dentoni
Get PDF (6 MB)

Coastal aquifers are in hydraulic contact with the sea; prolonged overpumping of groundwater can lead to inland encroachment and/or vertical up-coning of the interface (transition or mixing zone) between these regimes, causing salt contamination of freshwater aquifers. In the Mediterranean area, seawater intrusion (SWI) has sometimes become a major threat to coastal area freshwater resources, mainly due to lack of appropriate groundwater resources management. Current projections of future potential climatic scenarios further complicate the overview, because the worst considered possibilities provide critical predictions about the decline of the average amount of water available (in terms of both inflows and outflows); furthermore, the projected sea-level rise (SLR) could significantly alter the position and morphology of coastline. A proper analysis and risk assessment of areas subject to SWI, and the evaluation of the coastal basins hydrological response to climate variability, appear to be essential for the design of water management measures that are necessary to mitigate environmental and socio-economic impacts. The key objectives of the study are: 1) development of a methodology of SWI risk analysis in coastal aquifers; 2) application of the methodology to a real case-study (Gaza Strip coastal aquifer, Palestinian Territories) to assess the risk of saltwater ingression and 3) analysis of the effectiveness of mitigation strategies on SWI Risk to support the planning of future spatial and territorial organization. The aquifer system is studied with a simulation code to assess the feasibility of risk mitigation measures under climate induced changes, by the means of simulation/optimization methods, which can provide the quantitative information needed for the management of groundwater resources, with respect to assigned objectives and constraints. Results show that (i) SWI risk assessment can be addressed by means of groundwater simulation models, calibrated against field measures, as a tool to evaluate future contamination in response to projected climate scenarios and exploitation plans, and that (ii) mitigation measures can be developed, according to some predefined criteria, and expected benefits can be quantified. The research is carried out within the CLIMB project, funded by the 7th Framework Programme of the European Commission