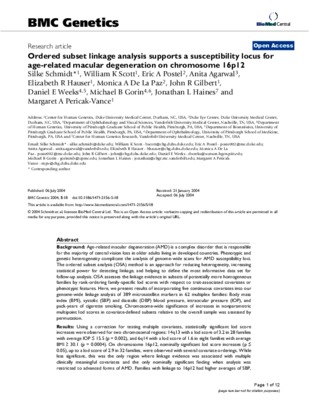 BACKGROUND: Age-related macular degeneration (AMD) is a complex disorder that is responsible for the majority of central vision loss in older adults living in developed countries. Phenotypic and genetic heterogeneity complicate the analysis of genome-wide scans for AMD susceptibility loci. The ordered subset analysis (OSA) method is an approach for reducing heterogeneity, increasing statistical power for detecting linkage, and helping to define the most informative data set for follow-up analysis. OSA assesses the linkage evidence in subsets of potentially more homogeneous families by rank-ordering family-specific lod scores with respect to trait-associated covariates or phenotypic features. Here, we present results of incorporating five continuous covariates into our genome-wide linkage analysis of 389 microsatellite markers in 62 multiplex families: Body mass index (BMI), systolic (SBP) and diastolic (DBP) blood pressure, intraocular pressure (IOP), and pack-years of cigarette smoking. Chromosome-wide significance of increases in nonparametric multipoint lod scores in covariate-defined subsets relative to the overall sample was assessed by permutation. RESULTS: Using a correction for testing multiple covariates, statistically significant lod score increases were observed for two chromosomal regions: 14q13 with a lod score of 3.2 in 28 families with average IOP ≤ 15.5 (p = 0.002), and 6q14 with a lod score of 1.6 in eight families with average BMI ≥ 30.1 (p = 0.0004). On chromosome 16p12, nominally significant lod score increases (p ≤ 0.05), up to a lod score of 2.9 in 32 families, were observed with several covariate orderings. While less significant, this was the only region where linkage evidence was associated with multiple clinically meaningful covariates and the only nominally significant finding when analysis was restricted to advanced forms of AMD. Families with linkage to 16p12 had higher averages of SBP, IOP and BMI and were primarily affected with neovascular AMD. For all three regions, linkage signals at or very near the peak marker have previously been reported. CONCLUSION: Our results suggest that a susceptibility gene on chromosome 16p12 may predispose to AMD, particularly to the neovascular form, and that further research into the previously suggested association of neovascular AMD and systemic hypertension is warranted