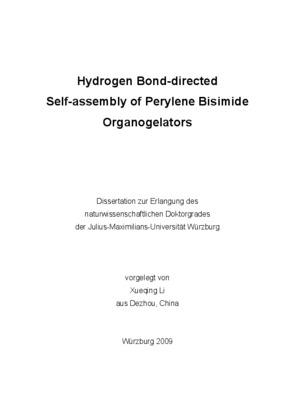 Perylene bisimide (PBI) dyes are a widely used class of industrial pigments, and currently have gained significant importance for organic-based electronic and optical devices. Structural modification at the PBI core results in changes of the optical and electronic properties, which enable tailored functions. Moreover, the aggregation behavior of PBIs is alterable and controllable to achieve new materials, among which organogels are of particular interest because of their potential for applications as supramolecular soft materials. In this work, new PBI-based organic gelators were designed, synthesized, and characterized, and the aggregation behaviors under different conditions were intensively studied by various spectroscopic and microscopic methods. In chapter 2, a brief overview is given on the structural and functional features of organogel systems. The definition, formation and reversibility of organogels are introduced. Some examples on dye based organogel are selected, among which PBI-based organogelators reported so far are especially emphasized. Some basic knowledges of supramolecular chirality are also overviewed such as characterization, amplification, and symmetry breaking of the chiral aggregates. According to our former experiences, PBIs tend to form aggregates because the planer aromatic cores interact with one another by pi-pi interaction. In chapter 3, a new PBI molecule is introduced which possesses amide groups between the conjugated core and periphery alkyl chains. It is found that well oriented aggregates are formed by hydrogen bonding and the pi-pi interaction of the cores. These interactions enable the aggregates to grow in one-dimension forming very long fibers, and these fibers further intercross to 3D network structures, e.g., organogels. In comparison to the very few PBI-based gelators reported before, one advantage of this gelator is that, it is more versatile and can gelate a wide range of organic solvents. Moreover, the well-organized fibers that are composed of extended &#960;-stacks provide efficient pathways for n-type charge carriers. Interestingly, AFM studies reveal that the PBI molecules form well-defined helical fibers in toluene. Both left-handed (M) and right-handed (P) helicities can be observed without any preference for one handedness because the building block is intrinsically achiral. In chapter 4, we tried to influence the M/P enantiomeric ratio by applying external forces. For example, we utilized chiral solvents to generate chiral aggregates with a preferential handedness. AFM analysis of the helices showed that a enantiomeric ratio of about 60: 40 can be achieved by aggregation in chiral solvents R- or S-limonene. Moreover, the long aggregated fibres can align at macroscopic level in vortex flows upon rotary stirring In chapter 5, bulky tetra-phenoxy groups are introduced in the bay area of the PBI gelator. The conjugated core of the new molecule is now distorted because of the steric hindrance. UV/Vis studies reveal a J-type aggregation in apolar solvents like MCH due to intermolecular pi-pi-stacking and hydrogen-bonding interactions. Microscopic studies reveal formation of columnar aggregates in apolar solvent MCH, thus this molecule lacks the ability to form gels in this solvent, but form highly fluorescent lyotropic mesophases at higher concentration. On the other hand, in polar solvents like acetone and dioxane, participation of the solvent molecules in hydrogen bonding significantly reduced the aggregation propensity but enforced the gel formation. The outstanding fluorescence properties of the dye in both J-aggregated viscous lyotropic mesophases and bulk gel phases suggest very promising applications in photonics, photovoltaics, security printing, or as fluorescent sensors. In chapter 6, we did some studies on combining PBI molecules with inorganic gold nanorods. Gold nanorods were synthesized photochemically. By virtue of the thioacetate functionalized PBIs, the rods were connected end to end to form gold nanochains, which were characterized by absorption spectra and TEM measurement. Such chromophore-nanorod hybrids might be applied to guide electromagnetic radiation based on optical antenna technology