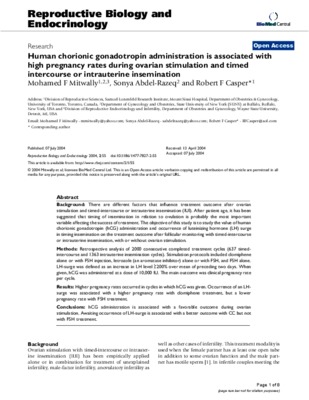 BACKGROUND: There are different factors that influence treatment outcome after ovarian stimulation and timed-intercourse or intrauterine insemination (IUI). After patient age, it has been suggested that timing of insemination in relation to ovulation is probably the most important variable affecting the success of treatment. The objective of this study is to study the value of human chorionic gonadotropin (hCG) administration and occurrence of luteinizing hormone (LH) surge in timing insemination on the treatment outcome after follicular monitoring with timed-intercourse or intrauterine insemination, with or without ovarian stimulation. METHODS: Retrospective analysis of 2000 consecutive completed treatment cycles (637 timed-intercourse and 1363 intrauterine insemination cycles). Stimulation protocols included clomiphene alone or with FSH injection, letrozole (an aromatase inhibitor) alone or with FSH, and FSH alone. LH-surge was defined as an increase in LH level ≥200% over mean of preceding two days. When given, hCG was administered at a dose of 10,000 IU. The main outcome was clinical pregnancy rate per cycle. RESULTS: Higher pregnancy rates occurred in cycles in which hCG was given. Occurrence of an LH-surge was associated with a higher pregnancy rate with clomiphene treatment, but a lower pregnancy rate with FSH treatment. CONCLUSIONS: hCG administration is associated with a favorable outcome during ovarian stimulation. Awaiting occurrence of LH-surge is associated with a better outcome with CC but not with FSH treatment