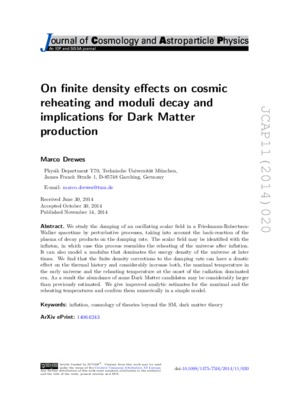 We study the damping of an oscillating scalar field in a Friedmann-Robertson-Walker spacetime by perturbative processes, taking into account the back-reaction of the plasma of decay products on the damping rate. The scalar field may be identified with the inflaton, in which case this process resembles the reheating of the universe after inflation. It can also model a modulus that dominates the energy density of the universe at later times. We find that the finite density corrections to the damping rate can have a drastic effect on the thermal history and considerably increase both, the maximal temperature in the early universe and the reheating temperature at the onset of the radiation dominated era. As a result the abundance of some Dark Matter candidates may be considerably larger than previously estimated. We give improved analytic estimates for the maximal and the reheating temperatures and confirm them numerically in a simple model