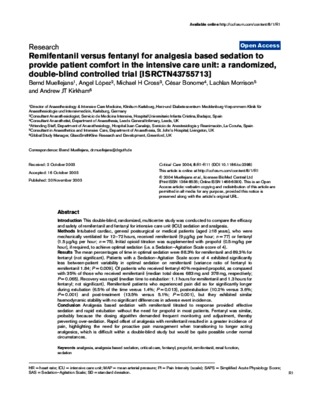 Remifentanil versus fentanyl for analgesia based sedation to provide patient comfort in the intensive care unit: a randomized, double-blind controlled trial [ISRCTN43755713]

INTRODUCTION: This double-blind, randomized, multicentre study was conducted to compare the efficacy and safety of remifentanil and fentanyl for intensive care unit (ICU) sedation and analgesia. METHODS: Intubated cardiac, general postsurgical or medical patients (aged ≥ 18 years), who were mechanically ventilated for 12–72 hours, received remifentanil (9 μg/kg per hour; n = 77) or fentanyl (1.5 μg/kg per hour; n = 75). Initial opioid titration was supplemented with propofol (0.5 mg/kg per hour), if required, to achieve optimal sedation (i.e. a Sedation–Agitation Scale score of 4). RESULTS: The mean percentages of time in optimal sedation were 88.3% for remifentanil and 89.3% for fentanyl (not significant). Patients with a Sedation–Agitation Scale score of 4 exhibited significantly less between-patient variability in optimal sedation on remifentanil (variance ratio of fentanyl to remifentanil 1.84; P = 0.009). Of patients who received fentanyl 40% required propofol, as compared with 35% of those who received remifentanil (median total doses 683 mg and 378 mg, respectively; P = 0.065). Recovery was rapid (median time to extubation: 1.1 hours for remifentanil and 1.3 hours for fentanyl; not significant). Remifentanil patients who experienced pain did so for significantly longer during extubation (6.5% of the time versus 1.4%; P = 0.013), postextubation (10.2% versus 3.6%; P = 0.001) and post-treatment (13.5% versus 5.1%; P = 0.001), but they exhibited similar haemodynamic stability with no significant differences in adverse event incidence. CONCLUSION: Analgesia based sedation with remifentanil titrated to response provided effective sedation and rapid extubation without the need for propofol in most patients. Fentanyl was similar, probably because the dosing algorithm demanded frequent monitoring and adjustment, thereby preventing over-sedation. Rapid offset of analgesia with remifentanil resulted in a greater incidence of pain, highlighting the need for proactive pain management when transitioning to longer acting analgesics, which is difficult within a double-blind study but would be quite possible under normal circumstances