The 22q11.2 deletion syndrome (22q11DS; velocardiofacial/DiGeorge syndrome; VCFS/DGS; MIM #192430; 188400) is the most common microdeletion syndrome. The phenotypic presentation of 22q11DS is highly variable; approximately 60-75 % of 22q11DS patients have been reported to have a congenital heart defect (CHD), mostly of the conotruncal type, and/or aortic arch defect. The etiology of the cardiac phenotypic variability is not currently known for the majority of patients. We hypothesized that rare copy number variants (CNVs) outside the 22q11.2 deleted region may modify the risk of being born with a CHD in this sensitized population. Rare CNV analysis was performed using Affymetrix SNP Array 6.0 data from 946 22q11DS subjects with CHDs (n = 607) or with normal cardiac anatomy (n = 339). Although there was no significant difference in the overall burden of rare CNVs, an overabundance of CNVs affecting cardiac-related genes was detected in 22q11DS individuals with CHDs. When the rare CNVs were examined with regard to gene interactions, specific cardiac networks, such as Wnt signaling, appear to be overrepresented in 22q11DS CHD cases but not 22q11DS controls with a normal heart. Collectively, these data suggest that CNVs outside the 22q11.2 region may contain genes that modify risk for CHDs in some 22q11DS patients.status: publishe 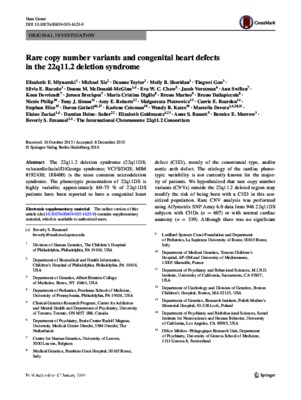 This paper was published in Lirias.