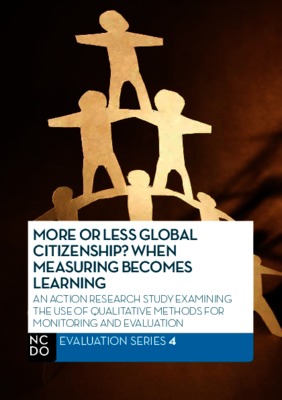 By Jan Van Ongevalle and Christine Carabain
Get PDF (840 KB)

An action research study examining the use of qualitative methods for monitoring and evaluationThis report presents the results of an action research in which four Dutch organisations active in promoting global citizenship experimented with qualitative research methods in their monitoring and evaluation cycles in order to gain a better understanding of the effects of their interventions. Several alternative methods were tested, including elements of Most Significant Change, Kelly’s Repertory Grid Analysis, focus group discussions and participative observation. The study was initiated by NCDO and was conducted between early 2013 and mid-2014. Its results show that the use of these methods in the four selected cases has indeed led to greater depth of knowledge concerning the effects, both intended and unexpected, of the interventions. The methods encouraged more real-time monitoring of effects, whereupon timely adjustments could be made. Moreover, the use of qualitative research methods allowed greater input from project staff and target groups with regard to the effects of an intervention. This greatly enhanced engagement and motivation and contributed to a better understanding of the effects of the projects and of the intervention logic on which those projects were based. However, this study also revealed that the use of qualitative research methods was rather demanding for the project teams, who may not have the necessary expertise and experience in collecting and analysing a large volume of qualitative monitoring data.status: publishe