Project Title: Sports Animations Name: Brehme Smiler Quidzinski Major: Digital Arts & Culture Minor (if applicable): Film Studies Expected Graduation: December 2020 Project Medium: Computer generated animations and videos Technology and Software Used: Adobe After Effects/Premier Artist Statement: Last summer I was able to land a job as an intern working with the soccer team Green Bay Voyageurs, this team shares a stadium with a baseball team called the Green Bay Booyah and working for the Voyageur lead to opportunities to work with both teams. This summer I am again working for both teams, knowing that I was going to work for these teams again I decided that my project for DAC 661 would be creating animations and other small media projects for these teams. The animations were decided based on each respected sport and ideas given to me by the teams, though not all will be finished or deemed right for this submission. For the baseball team I created animation for when a batter strikes out, a home run is hit, and for if the team wins. For the soccer team I went with when the team scores and when they win as their videoboard usage is limited more so than the baseball team. I also was asked to try and make some animations or videos for in-between game breaks that fans could interact with, a shuffle game where fans follow an item was one of the ideas selected. Going into the project, I had little idea on how to use Adobe After Effects or how people even made these animations. I started by looking up tutorials on YouTube for simple animation and then tried to put a spin on them or combine them to improve the animations. I would start with the backgrounds and then add text, color, and images that work with the animations before putting them together and finalizing them. I would make the animations in After Effects then add an touch-ups or variations in Adobe Premier, most animations last around seven seconds and are made to repeat forever (or until we need the animations to run). These animations may last for about a minute or less during games, in baseball games there is about thirty seconds between when a batter strikes out and the next batter coming up meaning these animations most be quick and noticeable (or at least flashy). Being this is my first attempts at animations, and I have enjoyed learning After Effects and working with the teams. While these animations are important, my main job with the teams is streaming games for both teams. With the shortened season due to Covid-19, I plan to get as much work done with the teams no matter what type of work it is. Whether this leads to more animation or not, I hope that working on these animations will leave me with plenty of experience for other jobs or projects going forward 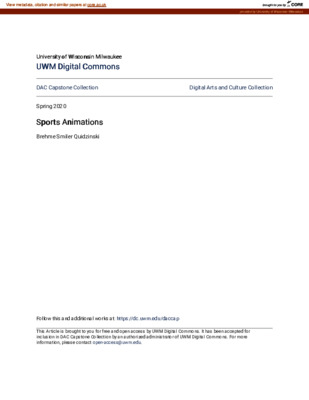