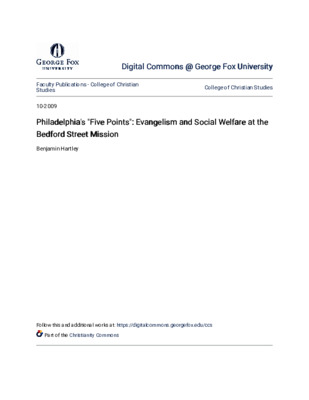 By Benjamin Hartley
Get PDF (3 MB)

New York City\u27s Five Points neighborhood in lower Manhattan was well-known in the mid-to-late nineteenth century as a major locus of concern related to the problems of burgeoning American cities. Its prominence was highlighted in Martin Scorsese\u27s 2002 film, The Gangs of New York, which even briefly portrayed the Methodists\u27 Five Points Mission that the famous holiness leader Phoebe Palmer was instrumental in founding. (1) Both Philadelphia and Boston had similar neighborhoods to New York\u27s Five Points. Methodist mission outposts in both of these cities eagerly (if ironically) claimed the notorious Five Points label to remind donors there were rough neighborhoods closer to home which rivaled the destitution--and missionary opportunity--found in New York. (2