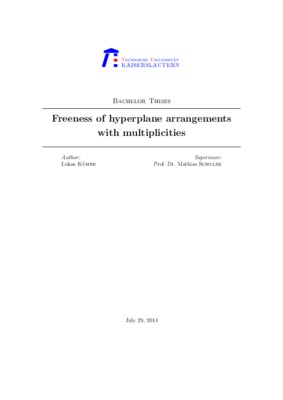 Freeness of hyperplane arrangements with multiplicities

This bachelor thesis is concerned with arrangements of hyperplanes, that is, finite collections of hyperplanes in a finite-dimensional vector space. Such arrangements can be studied using methods from combinatorics, topology or algebraic geometry. Our focus lies on an algebraic object associated to an arrangement \(\mathcal{A}\), the module \(\mathcal{D(A)}\) of logarithmic derivations along \(\mathcal{A}\). It was introduced by K. Saito in the context of singularity theory, and intensively studied by Terao and others. If \(\mathcal{D(A)}\) admits a basis, the arrangement \(\mathcal{A}\) is called free. Ziegler generalized the concept of freeness to so-called multiarrangements, where each hyperplane carries a multiplicity. Terao conjectured that freeness of arrangements can be decided based on the combinatorics. We pursue the analogous question for multiarrangements in special cases. Firstly, we give a new proof of a result of Ziegler stating that generic multiarrangements are totally non-free, that is, non-free for any multiplicity. Our proof relies on the new concept of unbalanced multiplicities. Secondly, we consider freeness asymptotically for increasing multiplicity of a fixed hyperplane. We give an explicit bound for the multiplicity where the freeness property has stabilized