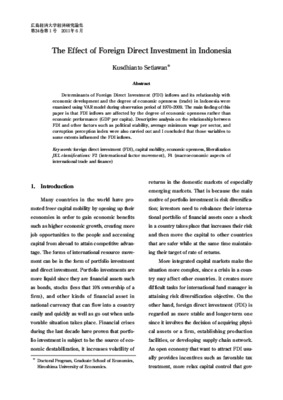 The Effect of Foreign Direct Investment in Indonesia

By Kusdhianto Setiawan
Get PDF (541 KB)

Determinants of Foreign Direct Investment (FDI) inflows and its relationship with economic development and the degree of economic openness (trade) in Indonesia were examined using VAR model during observation period of 1970?2009. The main finding of this paper is that FDI inflows are affected by the degree of economic openness rather than economic performance (GDP per capita). Descriptive analysis on the relationship between FDI and other factors such as political stability, average minimum wage per sector, and corruption perception index were also carried out and I concluded that those variables to some extents influenced the FDI inflows