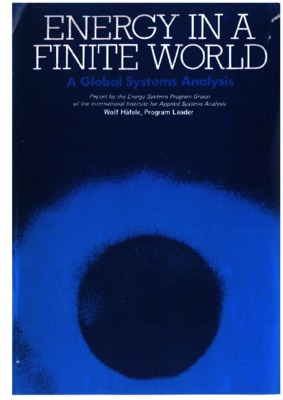 Energy in a Finite World: A Global Systems Analysis (Volume 2)

This volume presents the results of a seven-year study conducted at the International Institute for Applied Systems Analysis (IIASA) in Laxenburg, Austria. The work, which involved over 140 scientists from 20 countries, aimed to provide new and critical insights into the international long-term dimensions of the energy problem. Given this objective, the 50-year period from 1980 to 2030 was analyzed in detail, though parts of the study looked even further into the future. Geographically, all countries of the world were included -- developed and developing, market and centrally planned economies. The picture that emerges is one of a world facing, during the 1980-2030 period, what is anticipated to be the steepest ever increase in its population. At the same time, the developing regions of the world, in which most of this population growth will occur, will be trying to close the economic gap separating them from the developed regions. Despite the resultant strains on the world's physical resources, on its institutions, and on human ingenuity, the conclusion is that the physical resources and the human potential exist to provide the energy for a 2030 world that is more prosperous than the world of today while supporting a population double that of 1975. Moreover, if resources are developed judiciously and strategically, the world of 2030 could be at the threshold of a critical and ultimately necessary transition from a global energy system based on depletable fossil fuels to one based on nondepletable, sustainable resources. The companion volume, "Energy in a Finite World, Vol. 1, Paths to a Sustainable Future", also published by Ballinger, summarizes the findings of the study. ER-81-4, "Energy in a Finite World: Executive Summary", provides a more concise summary for a wide readership and is available directly from IIASA