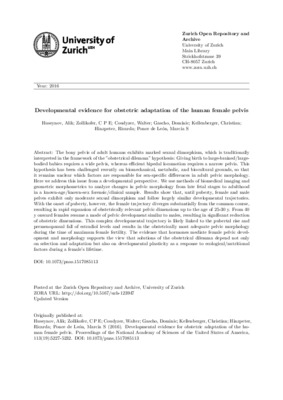 Developmental evidence for obstetric adaptation of the human female pelvis

The bony pelvis of adult humans exhibits marked sexual dimorphism, which is traditionally interpreted in the framework of the "obstetrical dilemma" hypothesis: Giving birth to large-brained/large-bodied babies requires a wide pelvis, whereas efficient bipedal locomotion requires a narrow pelvis. This hypothesis has been challenged recently on biomechanical, metabolic, and biocultural grounds, so that it remains unclear which factors are responsible for sex-specific differences in adult pelvic morphology. Here we address this issue from a developmental perspective. We use methods of biomedical imaging and geometric morphometrics to analyze changes in pelvic morphology from late fetal stages to adulthood in a known-age/known-sex forensic/clinical sample. Results show that, until puberty, female and male pelves exhibit only moderate sexual dimorphism and follow largely similar developmental trajectories. With the onset of puberty, however, the female trajectory diverges substantially from the common course, resulting in rapid expansion of obstetrically relevant pelvic dimensions up to the age of 25-30 y. From 40 y onward females resume a mode of pelvic development similar to males, resulting in significant reduction of obstetric dimensions. This complex developmental trajectory is likely linked to the pubertal rise and premenopausal fall of estradiol levels and results in the obstetrically most adequate pelvic morphology during the time of maximum female fertility. The evidence that hormones mediate female pelvic development and morphology supports the view that solutions of the obstetrical dilemma depend not only on selection and adaptation but also on developmental plasticity as a response to ecological/nutritional factors during a female's lifetime