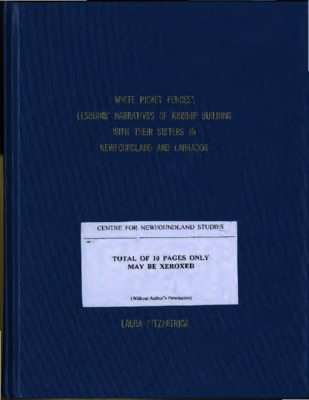 'White picket fences' : lesbians' narratives of kinship building with their sisters in Newfoundland and Labrador

By Laura Fitzpatrick
Get PDF (4 MB)

This thesis is based on a study in which I interviewed lesbians about their familial relationships with their heterosexual sisters. The 'lesbian sister' I analyze in this thesis is both literal and metaphorical. At its most literal level, the 'lesbian sister' signifies a concern with the experiences of lesbian sisters who participated in an interview-based study that composes a part of this thesis. At a metaphorical level, the 'lesbian sister' signifies its concern with the dis/continuities of the lesbian subject in feminism. I discuss the narratives of the lesbians I interviewed from their position within society as family's 'outlaws'. It is through the picture of lesbians as family's outlaws that family as a site of heterosexual privilege comes into view. While heterosexual women's powerlessness within the family marks their oppression, it is lesbians' lack of access to family that marks theirs. This difference in heterosexual women's and lesbians' experiences of sisterhood suggests that heterosexuality is not equally compulsory for heterosexual women and lesbians and compulsory heterosexuality does not mean the same thing for both. In this thesis I suggest that feminist analysis of family fails to grasp lesbians' position in society as family's outlaws because distinctions between heterosexuality as male dominance and heterosexuality as heterosexual dominance are under theorized. I call for a critical shift in feminist methodology to relinquish the idea that heterosexism is nothing but a by-product of sexism in order to bring into view the specific experiences of lesbian 'sisters'