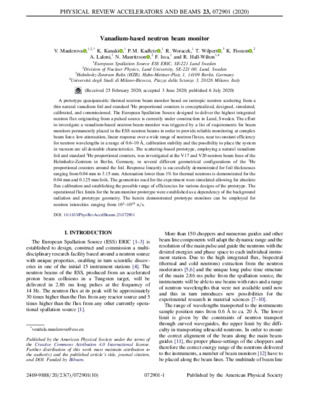 A prototype quasiparasitic thermal neutron beam monitor based on isotropic neutron scattering from a thin natural vanadium foil and standard 3He proportional counters is conceptualized, designed, simulated, calibrated, and commissioned. The European Spallation Source designed to deliver the highest integrated neutron flux originating from a pulsed source is currently under construction in Lund, Sweden. The effort to investigate a vanadium based neutron beam monitor was triggered by a list of requirements for beam monitors permanently placed in the ESS neutron beams in order to provide reliable monitoring at complex beamlines low attenuation, linear response over a wide range of neutron fluxes, near to constant efficiency for neutron wavelengths in a range of 0.6 10 , calibration stability and the possibility to place the system in vacuum are all desirable characteristics. The scattering based prototype, employing a natural vanadium foil andstandard 3He proportional counters, was investigated at the V17 and V20 neutron beamlines of the Helmholtz Zentrum in Berlin, Germany, in several different geometrical configurations of the 3He proportional counters around the foil. Response linearity is successfully demonstrated for foil thicknesses ranging from 0.04 mm to 3.15 mm. Attenuation lower than 1 for thermal neutrons is demonstrated for the 0.04 mm and 0.125 mm foils. The geometries used for the experiment were simulated allowing for absolute flux calibration and establishing the possible range of efficiencies for various designs of the prototype. The operational flux limits for the beam monitor prototype were established as a dependency of the background radiation and prototype geometry. The herein demonstrated prototype monitors can be employed for neutron intensities ranging from 103 1010 n s

Topics: Large scale facilities for research with photons neutrons and ions
Year: 2020
OAI identifier: oai:helmholtz.HZB:101871
Provided by: HZB Repository
Download PDF:
Sorry, we are unable to provide the full text but you may find it at the following location(s):