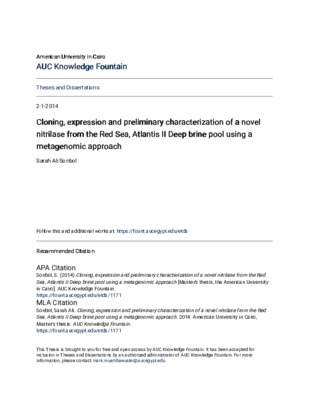 With the abundance of hazardous nitrile compounds in nature and with the extensive use of them in industries of fine chemicals, the attention towards nitrilases has profoundly increased as biocatalysts in different industries and in bioremediation. The use of nitrilases, which hydrolyze nitriles into carboxylic acids and ammonia, was introduced as a biological method superior to conventional chemical means. In contrast to conventional microbiological techniques using cultured microorganisms, and with the loads of genomic sequences available in the databases, identification of novel nitrilases using metagenomic approaches seems more promising. In this study, a nitrilase was isolated from the microbial metagenomic DNA obtained from the Lower Convective Layer (LCL) of Atlantis II Deep Brine Pool in the Red Sea. Sequences of putative nitrilases were retrieved from the LCL database, followed by PCR amplification and gene synthesis of the chosen sequences. Amplified genes were cloned into pET SUMO expression vector, whereas a synthesized gene, with optimized codons for E. coli, was cloned into pET-28b+ vector flanked by SacI and HindIII restriction sites. The recombinant proteins were then expressed in Escherichia coli BL21 (DE3) cells. The His-tagged protein (Nitra-S), from the recombinant pET-28b+ transformed cells, was successfully purified using Ni-NTA affinity chromatography columns under native conditions. Preliminary studies on the induced cells, crude extracts and the purified enzyme showed that Nitra-S exhibited nitrilase activity towards dinitriles (succinonitrile and gluteronitrile) rather than other nitrile classes. The used quantitative activity assay was based on measuring the amounts of released ammonia upon the action of nitrilases on their nitrile substrates. Full characterization of the purified nitrilase is still to be done; however, the isolation of this protein from the LCL with its unique characteristics, increase the odds towards finding exceptional properties of the newly identified nitrilase