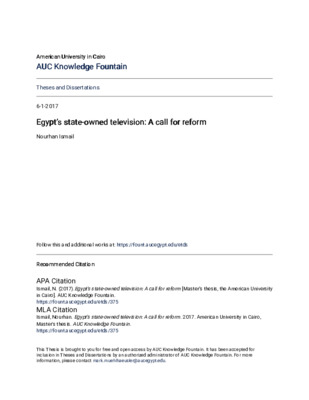 Public organizations have to go through some reforms to satisfy the social demands and meet challenges required for increasing productivity and accountability. Public organizations have the strong tie between government and society; thus, they should work on their employee’s satisfaction, besides satisfying social needs and demands for citizens. This study will focus on performance of Egypt’s state-owned TV, which affects outputs reflected in the quality of TV programs. It would represent a schema of the current performance of Egyptian Radio and TV Union’s outcome of Egyptian TV programs Performance includes activities and measurable outputs. There are persistent challenges and obstacles at the ERTU; such as decline in viewership rates, failure of making use of television resources and cadres, and red tape that causes the disruption of the workflow within the union, which may deactivate the production wheel. This study looked into the successful reform of Egypt Telecom using HRM approach. It concludes by proposing ERTU reform, either through driving in the privatization route, or through applying Human Performance Technology (HPT) model, which is considered an advancement of HRM. HPT promotes “invitation” to re-visit, re-think, and re-imagine how ERTU can claim back its popularity through creativity, innovation and the use of modern technology