In this work, voltammetric andelectrolysis experiments have been carried out on a conductive boron dopeddiamond (BDD) electrode in solution containing amoxicillin in itspharmaceutical formulation. The physical characterization of the BDD surface byscanning electron microscopy (SEM) reveals a polycrystalline structure withgrain sizes ranging between 0.3 and 0.6 µm. With Raman spectroscopy, BDDsurface is composed of diamons (Csp3) type carbon (Csp3)and graphitic type carbon (Csp2). The electrochemical characterization of the BDD electrode in sulfuric acid electrolyte showed a wide potential window worthing 2.74 V. The oxidation of Amoxicillin showed an irreversible anodic wave on the voltammogram in the domain of water stability indicating a direct oxidation of amoxicillin at BDD surface. The treatment of Amoxicillin in the synthetic wastewaters under various constant current densities 20, 50, 100, 135 mA cm-2 on BDD showed that Amoxicillin is highly reducedunder 100 mA cm-2 reaching 92% of the Chemical Oxygen Demand (COD)removal after 5 h of electrolysis. Investigation performed in perchloric acidas supporting electrolyte led to 87% of COD removal after 5 h of electrolysis.Mineralization of amoxicillin occurs on BDD and the chemical oxygen demandremoval was higher in sulfuric acid than in perchloric acid owing to theinvolvement of the in-situ formed persulfate and perchlorate to the degradation process mainly in the bulkof the solution. The instantaneous current efficiency (ICE) presents anexponential decay indicating that the process was limited by diffusion. Thespecific energy consumed after 5h of the amoxicillin electrolysis was 0.096 kWh COD-1and 0.035 kWh COD-1 in sulfuric acid and in perchloric acidrespectively 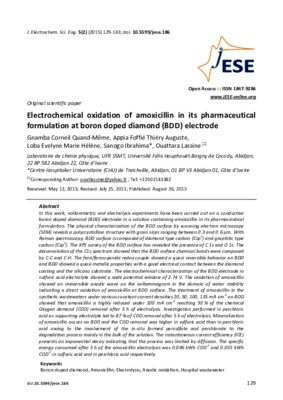