Empirical assessment of stabilization effects of fiscal policy in Croatia

The aim of this paper is to assess the stabilization effects of fiscal policy in Croatia in a structural vector autoregression framework as proposed by Blanchard and Perotti (2002). Empirical studies of fiscal policy effects show that results are contradictory and do not unanimously agree, except for one fact: a positive government spending shock has a positive effect on output. This study inspects the effects of government spending and tax shocks on a set of macroeconomic variables (output, prices, interest rates, private consumption, private investment, employment and wages). Results prove that the fiscal transmission mechanism in Croatia works mainly in a Keynesian manner. Output reacts negatively to a tax shock and positively to government spending shock. The output multiplier is above 2 at impact and the effect is significant throught the whole time span. The negative effect of the tax shock is mostly driven by indirect (not direct) taxes, while the positive effect of a government spending shock is influenced by government consumption and government investment, but the effect of the latter is more significant when private consumption and private investment responses are observed 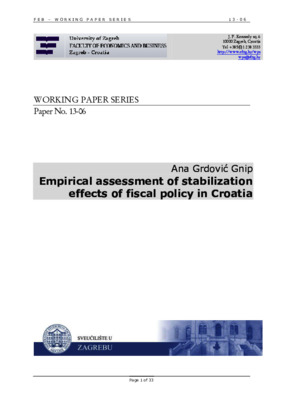