Investigation of the mercury speciation (total/reactive and dissolved/ /particular forms) was carried out in waters of the highly stratified Krka River Estuary. The concentrations obtained are in satisfactory agreement with those obtained for other unpolluted aquatic environments (0.5-2.5 ng/L for total mercury, 0.1-0.8 ng/L for dissolved mercury and 0.04-0.75 pg/g for particulate mercury, 0 > 0.45 pm). Two or three discernible water layers (the upper fresh or brackish water layer, deeper saline layer and the in-between intermediate water layer) revealed different distribution of mercury species. In the upper freshwater layer with low salinity, the fraction of reactive mercury varied considerably with salinity changes (10-100% of the total), both during a single sampling campaign, as well as between particular sampling periods which coincided with different seasons and river regimes. This generally corresponded to the dissolved mercury fraction, confirming the insignificance of the organically bound dissolved mercury. In the bottom saline layer, mercury was mostly reactive (80-100% of the total), and even a part of the particulate mercury behaved as labile toward SnCl2 reduction. In the upper water layer (low-salinity), the largest fraction of mercury was bound to particles, which were mostly of biological origin (plankton), except in the lower part of the estuary, where the particles were of anthropogenic origin (municipal waste discharge from the city of Šibenik). Accumulation of mercury, both in reactive and particulate form, was observed at the halocline, e.g. at the fresh/saline water interface (FSI) 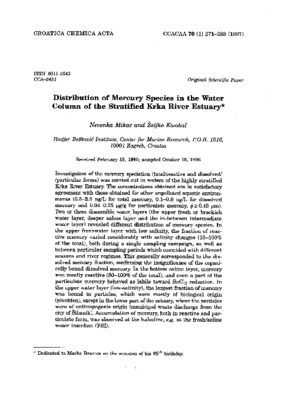