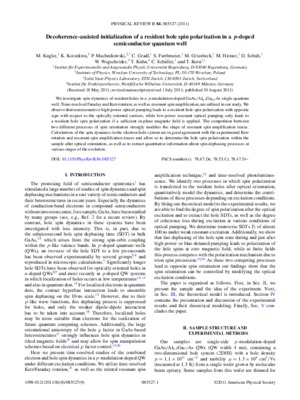 We investigate spin dynamics of resident holes in a p-modulation-doped GaAs/Al0.3Ga0.7As single quantum well. Time-resolved Faraday and Kerr rotation, as well as resonant spin amplification, are utilized in our study. We observe that nonresonant or high-power optical pumping leads to a resident hole spin polarization with opposite sign with respect to the optically oriented carriers, while low-power resonant optical pumping only leads to a resident hole spin polarization if a sufficient in-plane magnetic field is applied. The competition between two different processes of spin orientation strongly modifies the shape of resonant spin amplification traces. Calculations of the spin dynamics in the electron-hole system are in good agreement with the experimental Kerr rotation and resonant spin amplification traces and allow us to determine the hole spin polarization within the sample after optical orientation, as well as to extract quantitative information about spin dephasing processes at various stages of the evolution