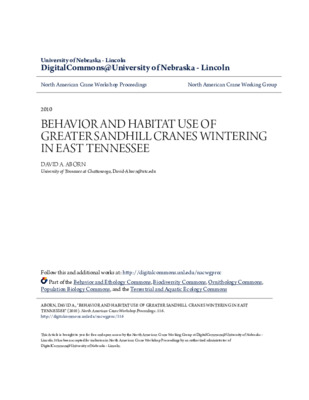 An increase of eastern greater sandhill cranes (Grus canadensis tabida) stopping over and wintering at the Hiwassee Wildlife Refuge in east Tennessee has led to overcrowding at the refuge, resulting in crane use of private property. Proper management is needed to prevent the cranes from becoming a nuisance, increase the suitability of the refuge for waterfowl, and reduce the likelihood of a disease outbreak. Observations of cranes revealed that cranes spent 83% of their time foraging, alert, or preening. Sandhill cranes foraged primarily in agricultural and grassy fields, whereas mudflats and shallow water were used for preening and loafing. Cranes tended to use grassy fields and mudflats in greater proportion to their availability, whereas agricultural fields and shallow water were underused. The results suggest that management techniques used with sandhill cranes elsewhere will also support crane populations at Hiwassee. The issue of overcrowding at the refuge, however, still needs to be addressed