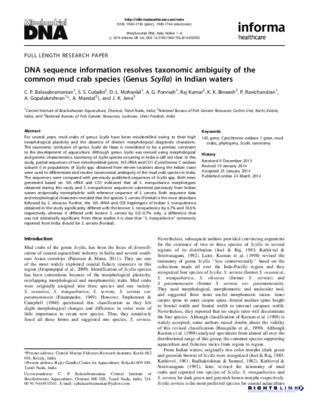 For several years, mud crabs of genus Scylla have been misidentified owing to their high morphological plasticity and the absence of distinct morphological diagnostic characters. The taxonomic confusion of genus Scylla de Haan is considered to be a primary constraint to the development of aquaculture. Although genus Scylla was revised using morphological and genetic characteristics, taxonomy of Scylla species occurring in India is still not clear. In this study, partial sequences of two mitochondrial genes, 16S rRNA and CO1 (Cytochrome C oxidase subunit I) in populations of Scylla spp. obtained from eleven locations along the Indian coast were used to differentiate and resolve taxonomical ambiguity of the mud crab species in India. The sequences were compared with previously published sequences of Scylla spp. Both trees generated based on 16S rRNA and CO1 indicated that all S. tranquebarica morphotypes obtained during this study and S. tranquebarica sequences submitted previously from Indian waters reciprocally monophyletic with reference sequence of S. serrata. Both sequence data and morphological characters revealed that the species S. serrata (Forskal) is the most abundant followed by S. olivacea. Further, the 16S rRNA and COI haplotypes of Indian S. tranquebarica obtained in the study significantly differed with the known S. tranquebarica by 6.7% and 10.6% respectively whereas it differed with known S. serrata by 0.0–0.7% only, a difference that was not statistically significant. From these studies it is clear that ‘‘S. tranquebarica’’ commonly reported from India should be S. serrata (Forskal)