The Indian oil-sardinella (Sardinella longiceps Val .) has traditionally played a critical role in the marine fishery economics of India, and in particular in the State of Kerala. It's production on the west coast of India exhibits large fluctuations over the years, though it continues to be commercially the most important and abundant pelagic resource (Table 1). These fluctuations have attracted the attention of many research workers. As early as 1910 Hornell attributed them to changes in diatom production or food availability to the fry and the prevalence of favourable hydrological conditions. Kesteven (1967) was of the view that the fluctuations are related to shifts in the migratory path of the fish, causing variations in the accessibility of the stocks to fishing due to the limited range of the fishing operations 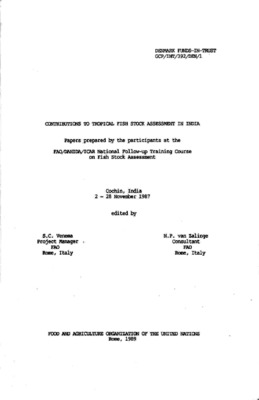