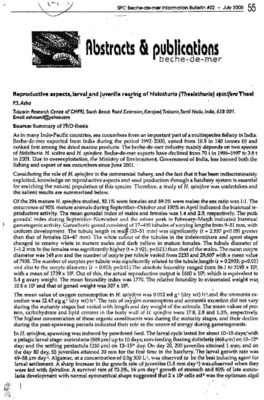 As in many Indo-Pacific countries, sea cucumbers form an important part of a mullispedes fishery in India. Beche-de-mer exported from India during the period 1992-2000, varied from 10.5 to 140 tonnes (t) and ranked first among the dried marine products. The beche-de-mer industry mainly depends on two spedes of Holothuria: H. scabra and H. spinifera. Beche-de-mer exports have declined from 70 t in 19%-1997 to 3.8 t in 2001. Due to overexploitation, the Ministry of Environment, Government of India, has banned both the fishing and export of sea cucumbers since June 2001