The pharaoh cuttle Sepia pharaonis Ehrenberg, 1831 (Mollusca: Cephalopoda: Sepiida) is a broadly distributed species of substantial fisheries importance found from east Africa to southern Japan. Little is known about S. pharaonis phylogeography, but evidence from morphology and reproductive biology suggests that Sepia pharaonis is actually a complex of at least three species. To evaluate this possibility, we collected tissue samples from Sepia pharaonis from throughout its range. Phylogenetic analyses of partial mitochondrial 16S sequences from these samples reveal five distinct clades: a Gulf of Aden/Red Sea clade, a northern Australia clade, a Persian Gulf/Arabian Sea clade, a western Pacific clade (Gulf of Thailand and Taiwan) and an India/Andaman Sea clade. Phylogenetic analyses including several Sepia species show that S. pharaonis sensu lato may not be monophyletic. We suggest that ‘‘S. pharaonis’’ may consist of up to five species, but additional data will be required to fully clarify relationships within the S. pharaonis complex 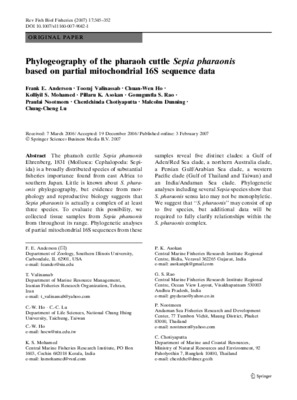