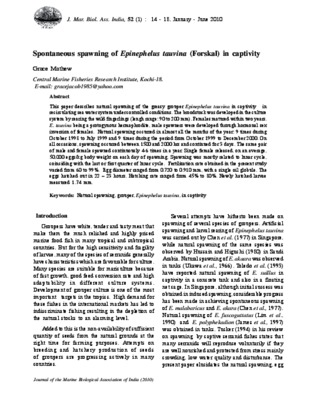 This paper describes natural spawning of the greasy grouper Epinephelus tauvina in captivity in recirculating sea water system under controlled conditions. The broodstock was developed in the culture system by rearing the wild fingerlings (lengh range: 90 to 200 mm). Females matured within two years. E. tauvina being a protogynous hermaphrodite, male spawners were developed through hormonal sex inversion of females. Natural spawning occurred in almost all the months of the year; 9 times during October 1998 to July 1999 and 9 times during the period from October 1999 to December 2000. On all occasions, spawning occurred between 1500 and 2000 hrs and continued for 3 days. The same pair of male and female spawned continuously 4-6 times in a year. Single female released, on an average, 50,000 eggs/kg body weight on each day of spawning. Spawning was mostly related to lunar cycle, coinciding with the last or first quarter of lunar cycle. Fertilization rate obtained in the present study varied from 60 to 99%. Egg diameter ranged from 0.720 to 0.910 mm, with a single oil globule. The eggs hatched out in 22 – 23 hours. Hatching rate ranged from 45% to 80%. Newly hatched larvae measured 1.74 mm