Status of Research in Marine Fisheries and Mariculture (Role of CMFRI)

Marine Fisheries and mariculture sectors occupy a very important position in India's economy. The country is blessed with a long coast line of 8129 km., a vast exclusive economic zone (2.02 sq.km.), a potential yield of 3.9 million tonnes per year and an impressive infrastructure for harvest and postharvest operations. The annual marine fish landings have reached 2.41 million tonnes in 1996 valued at about Rs 7,230 crores against a fixed and operating cost of Rs 4,528 crores. The exports of marine fishery products reached 378,199 t valued at Rs 4,121 crores in 1996-97. Organised research in marine fisheries and mariculture started in 1947 with the establishment of the CMFRI. During this fifty-year period, a large database on marine capture fishery statistics, biology of exploited stocks, fishery environmental characteristics and economics has been built up. The database thus developed has been forming the basis for various marine fisheries development activities in the countr 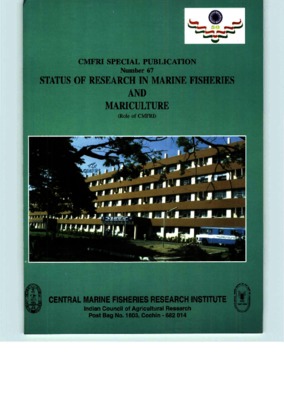