Motorization of country craft in Kerala - an impact study

KeraIa occupies the foremost position in marine fish production in India, accounting for almost a quarter of the total landings of 1.6 million tonnes. Marine fishing using artisanal tackle is an age old tradition of the State. Mechanization was experimented in late fifties under the Indo-Norwegien project in Quilon area. The early sixties witnessed an important technological development, in gear, the shift from cotton to nylon nets. By mid sixties individual entrepreneurs entered the scene, paving way for a fast development of trawl fishery in the coastal waters. Commercial purse-seining started during the late seventies and the process of large scale motorization of country craft began in early eighties even though, experimental projects on motorization were tried much earlier (Jacob et al; 1987) 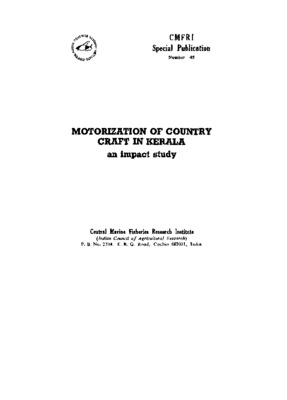