The relationship between monthly landings of oil sardine, mackerel, Stolephorus spp., elasmobranchs and environmental variables were used for developing multiple time series models of the type Vector Autoregressive model with environmental variables as exogenous variables (VARX model). Landings of these species/groups at Cochin Fisheries Harbour and environmental variables recorded at Cochin during 1988-97 were used for the study. Six different VARX models were fitted using the four landings time series as output vector and two environmental time series, one each to represent temperature and rainfall, as exogenous vector. The results revealed that an increase in highest rainfall is expected to cause increased landings of Stolepliorus spp., increase in the values of highest and lowest temperatures and highest rainfall are not favourable for good landings of mackerel, the series on number of rainy days has significant negative effect on the series on elasmobranchs landings and increase in highest temperature is expected to cause reduction in oil sardine landings 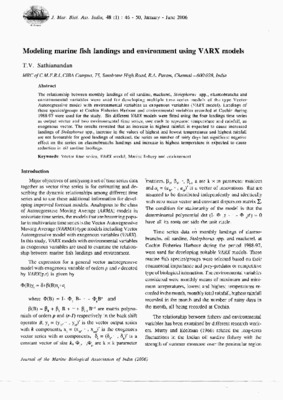