Notes on eggs, larvae and juveniles of fishes from Indian waters XI. Further observations on the genus Auxis Cuvier

Two species are known under the genus Auxis and both have been recorded from Indian coasts (Jones, .1958; Jones and Silas, 1960). Of these the short corseletted form, A. (hazard, is found in all the warm seas while the long corseletted form A. thynnoides is considered to be confined to the Indo- Pacific. However, Matsumoto (1959) has expressed the view that the species occurring on the Atlantic coast of America has a long corselet, which if confirmed, would change considerably our distributional concept of the two species. While there is no doubt about the existence of two species of Auxis in the Indo-Pacific, it is obvious that thek nomenclature requires further elucidation (Jones and Silas, MS.) 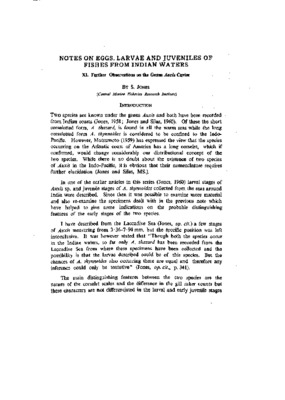