The present account describes the embryonic stages of a squid, the egg capsules of which were obtained by the author from the Gulf of Mannar. From the nature of the capsules and the characteristics of the newly hatched young ones, it has been possible to assign them to a myopsid decapodan, dibranchiate cephalopod. The species of the squid that is most common and contributes to a minor fishery in the Gulf of Mannar and Palk Bay is Sepioteuthis arctipinnis Gould (Rao, 1954). Rao (loc. cit.) has observed that this species begins spawning in January in the offshore waters and then migrates into the inshore waters and the coastal lagoons where it continues to spawn from February to June or July. Egg capsules of this squid were met with in the Gulf of Mannar and the Palk Bay from January to June (Rao, he.cit.). In the present instance the egg capsules were collected in March. These observations lend corroborative evidence to suppose that the species dealt with here is Sepioteuthis arctipinnis Gould 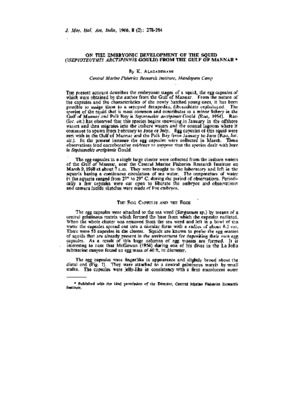