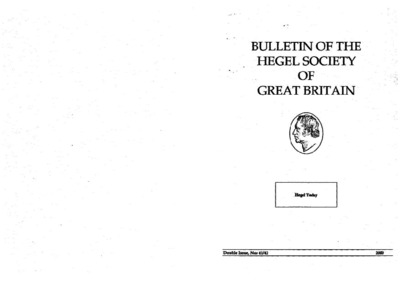 From the Separateness of Space to the Ideality of Sensation. Thoughts on the Possibilities of Actualizing Hegel's Philosophy of Nature

By Dieter Wandschneider
Get PDF (1 MB)

The Cartesian concept of nature, which has determined modern thinking until the present time, has become obsolete. It shall be shown that Hegel's objective-idealistic conception of nature discloses, in comparison to that of Descartes, new perspectives for the comprehension of nature and that this, in turn, results in possibilities of actualizing Hegel's philosophy of nature. If the argumentation concerning philosophy of nature is intended to catch up with the concrete Being-of-nature and to meet it in its concretion, then this is impossible for the finite spirit in a strictly a priori sense – this is the thesis supported here which is not at all close to Hegel. As the argumentation rather has to consider the conditions of realization concerning the Being-of-nature, too, it is compelled to take up empirical elements – concerning the organism, for instance, system-theoretical aspects, physical and chemical features of the nervous system, etc. With that, on the one hand, empirical-scientific premises are assumed (e.g. the lawlikeness of nature), which on the other hand become (now close to Hegel) possibly able to be founded in the frame of a Hegelian-idealistic conception. In this sense, a double strategy of empirical-scientific concretization and objective-idealistic foundation is followed up, which represents the methodical basic principle of the developed considerations. In the course of the undertaking, the main aspects of the whole Hegelian design concerning the philosophy of nature are considered – space and time, mass and motion, force and law of nature, the organism, the pro-blem of evolution, psychic being – as well as Hegel's basic thesis concerning the philosophy of nature, that therein a tendency toward coherence and idealization manifests itself in the sense of a (categorically) gradually rising succession of nature: from the separateness of space to the ideality of sensation. In the sense of the double strategy of concretization and foundation it is shown that on the one hand possibilities of philosophical penetration concerning actual empirical-scientific results are opened, and on the other hand – in turn – a re-interpretation of Hegel's theorem on the basis of physical, evolution-theoretical and system-theoretical argumentation also becomes possible. In this mutual crossing-over and elucidation of empirical and Hegelian argumentation not only do perspectives of a new comprehension of nature become visible, but also, at the same time – as an essential consequence of this methodical principle – thoughts on the possibilities of actualizing Hegel's philosophy of nature