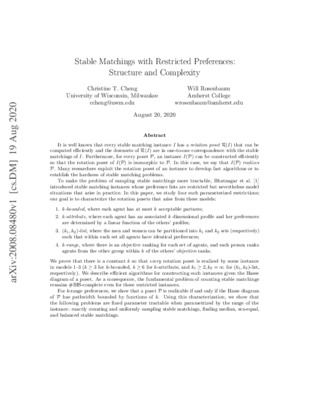 By Christine T. Cheng and Will Rosenbaum
Get PDF (3 MB)

It is well known that every stable matching instance $I$ has a rotation poset $R(I)$ that can be computed efficiently and the downsets of $R(I)$ are in one-to-one correspondence with the stable matchings of $I$. Furthermore, for every poset $P$, an instance $I(P)$ can be constructed efficiently so that the rotation poset of $I(P)$ is isomorphic to $P$. In this case, we say that $I(P)$ realizes $P$. Many researchers exploit the rotation poset of an instance to develop fast algorithms or to establish the hardness of stable matching problems. In order to gain a parameterized understanding of the complexity of sampling stable matchings, Bhatnagar et al. [SODA 2008] introduced stable matching instances whose preference lists are restricted but nevertheless model situations that arise in practice. In this paper, we study four such parameterized restrictions; our goal is to characterize the rotation posets that arise from these models: $k$-bounded, $k$-attribute, $(k_1, k_2)$-list, $k$-range. We prove that there is a constant $k$ so that every rotation poset is realized by some instance in the first three models for some fixed constant $k$. We describe efficient algorithms for constructing such instances given the Hasse diagram of a poset. As a consequence, the fundamental problem of counting stable matchings remains $\#$BIS-complete even for these restricted instances. For $k$-range preferences, we show that a poset $P$ is realizable if and only if the Hasse diagram of $P$ has pathwidth bounded by functions of $k$. Using this characterization, we show that the following problems are fixed parameter tractable when parametrized by the range of the instance: exactly counting and uniformly sampling stable matchings, finding median, sex-equal, and balanced stable matchings.Comment: Various updates and improvements in response to reviewer comment